Major League Baseball’s 2022 season marks the 75th anniversary of Jackie Robinson breaking the color barrier on April 15, 1947, when he competed for the Brooklyn Dodgers and became the first African-American player in Major League Baseball. To mark the occasion, Chock full o’Nuts® is launching three sizes of limited-edition Jackie Robinson Chock full o’Nuts® coffee cans in stores and online, hitting shelves in April 2022, with a portion of the proceeds from each purchase being donated to the JRF.

Upon retiring from baseball, Robinson made history again when William Black, founder of Chock full o’Nuts®, tapped him to become an executive at the New York-based coffee company. The iconic black, red, and yellow packaging of Chock full o’Nuts® coffee products will feature a special design incorporating photos of Robinson both as an athlete and while he served as vice president of personnel from 1957 until 1964.

“For nearly 50 years, JRF has worked to level the playing field in the workplace, having disbursed over $100 million in aid to talented college students who have gone on to become leaders in their professions and communities,” said Della Britton, president of the Jackie Robinson Foundation. “We are so grateful to Chock full o’Nuts® for recognizing the importance of our mission and the contribution of our namesake to corporate America and its own history.”

“Beyond his achievements in sports, Mr. Robinson was a consistent champion for civil rights,” said Eric Van De Wal, Senior Vice President of Sales & Marketing at Massimo Zanetti Beverage USA, the owner and manufacturer of the Chock full o’Nuts® brand. “We are excited to support the memory of this important debut and we remain honored to have had him on our team.”

The JRF is a national non-profit organization founded in 1973 by Robinson’s wife, Rachel Robinson. Since 1973, JRF has disbursed millions in grants and direct support to 1,800 JRF Scholars. The Foundation preserves the legacy of the Baseball Hall of Famer through its minority college scholarship program, online college success platform, and the Jackie Robinson Museum in New York City. 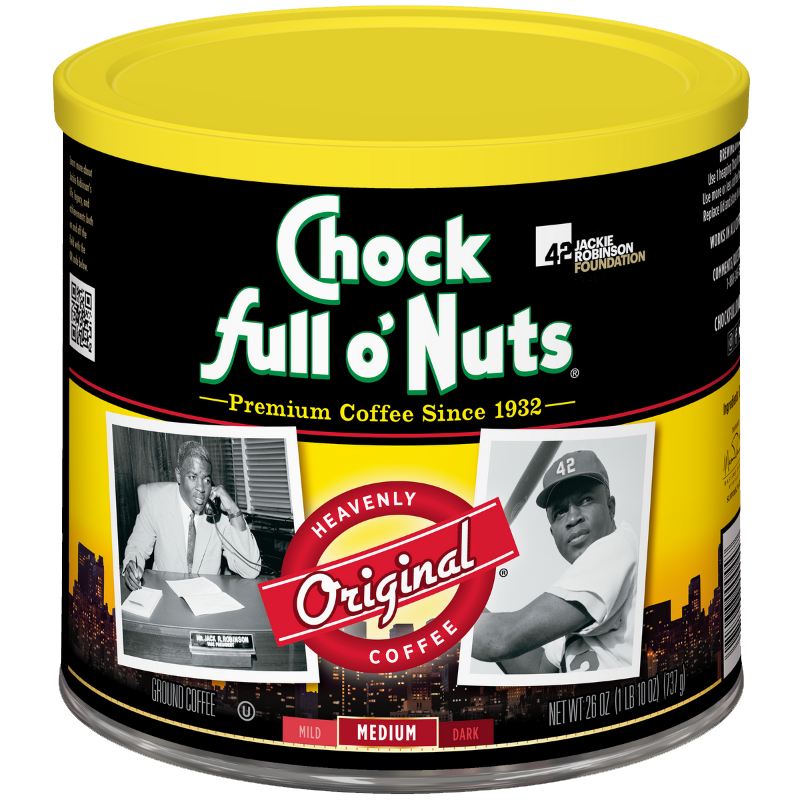